“You’re going to Australia? You know they have really big spiders there.”; “Don’t get bit by a spider while you’re there. You know, they have this one that looks like a rock and if it bites you, then you have two minutes to live. It’s more poisonous than a cobra.” – My boss, the day after I told him I would be quitting and venturing to the land of Oz/ Everyone who I told I was moving to Australia.

Spiders. Everyone from the rest of the world seems to think that Australia is synonymous with venomous creepies and crawlies, constantly planning your untimely demise. While yes, there are a ton of venomous spiders and snakes, they are not as common as you may think. Usually.

We took our van out to the Yarra Valley for a weekend of wine. What we did not realize was that we also took a stowaway…

We decided to spend two nights at a caravan park so that we would already be checked in and settled for the Saturday morning we wished to do our makeshift Uber tour.

During breakfast we engaged in a lovely conversation with another man who was staying there. I sat on our couch while Joel stood outside and cooked breakfast. I was facing out the backdoor for the conversation.

After he left, Joel and I continued our chat.

This had gone on for a solid twenty minutes with me facing out the backdoor. When I noticed… “Oh shit, there is a huntsman in our van…” Was my very calm statement. Joel expressed his disbelief. I got out of the van, he got into the van and looked. It was indeed a massive spider. Now, it’s not that I’m afraid of spiders per se; but, I do have a healthy level of evolutionarily appropriate discomfort to discovering one living in my personal space.

Fortunately, huntsman spiders don’t really harm people but still!!! There was massive spider in my house.

I left to grab our friends to come look, she got into the van for a closer look. Joel and I both got back into the van to take pictures.

We went to eat our breakfast and debate how to remove Pritchard (Our name for him).

We came back to the van pleasantly surprised to see he hadn’t moved.

The best course of action that we could come up with was for Joel to put on gloves, take a Tupperware container and try to catch him in it and safety relocate him.

After the 45 minutes had elapsed of him not moving, despite us coming for closer looks, the second Joel put the gloves on and went to step inside he scuttled across the back of the van and disappeared into the hole he must have come out from. The wily bugger. 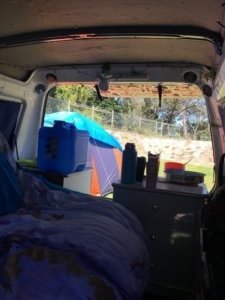 Pritchard with his escape holes.

We never saw Pritchard again… and despite all my wine, I barely slept. I did not wish to wake up and see him staring down upon me. My hand, in the same place as the spider was, for size context.